Jack Reacher – The law has limits. He does not. 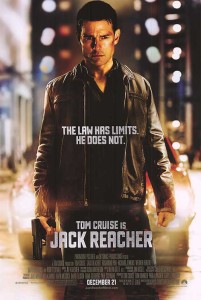 Tom Cruise is Jack Reacher even though the height differential between character and actor is too much. Tom Cruise brings this character to life. I have to admit I was impressed with his acting and with what a good movie this turned out to be. Robert Duvall has a small part but he does a great job teaching Tom Cruise how to drive Nascar…….Wait a second that was Days of Thunder. The story is about a sniper attack that has a former soldier being charged and when he is asked to give a written confession he simply writes “Get Jack Reacher”. Jack shows up and ruffles feathers, steps on toes, and more importantly investigates this sniper attack. The back story is great and the events that take place are awesome. The one question that drives Jack Reacher is “Who pays for parking?” This movie is surprisingly one of the better movies I have seen over the last few years, I watched it twice in the same week. There is a scene where Tom Cruise is getting his things from a police officer and that person is the author of the nineteen Jack Reacher novels. This story was based on the novel One Shot by Lee Child.

Screenplay: I could not find the screenplay.

If you liked this try: Blow Out, Vantage Point, Walking Tall.